Pro vs. Anti Trump, or Nazi vs. Bloc?

Posted by Skip Pulley on March 06, 2017
A Clueless, irrelevant Media referrers to Black Bloc as "Anarchism", meanwhile
Drumpf supporters get their wigs split, echoing the petulance of a crumbling system 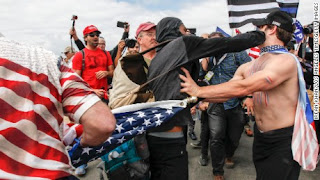 March 16, 2017
Hardly anyone showed up in most major cities for the nationwide alt-Klan rallies planned for Saturday March 4th (the average was about 20 people per "rally") other than in the modern day neo-nazi capitol of St. Paul and the ironically not ironic Washington DC trump rally, primarily organized by a group called “Gays for Trump”; a group which, again I must reiterate, research shows that trump most likely identifies with personally, as male homosexuals are the only group he neglected to slander or offend during and since his campaign run. But I digress.

In the cities in which a crowd slightly larger than the average group of buffet patrons gathered in favor of Donny tiny-hands, the Trumpeters were met with counter-protests and anti-trump demonstrators whose chants drowned out the pro-slavery rhetoric of privileged white conservatives, confused and angry white working classmates and self-loathing trump supporters of color. Although some conservative-controlled media groups claimed “several hundred” trump supports showed up in a handful of cities, this number could not be confirmed and is more likely an attempt to save face via neo-nationalist supported propagandist media.

In Berkeley, CA, a group of trumpsters who numbered a whopping 70 strong were served complimentary teeth sandwiches and black eyes by a well disciplined, motivated group of principled anarchists; a phrase which has become redundant, as all true anarchists are principled by definition; in open rebellion against both the totalitarian alt-right and the neo-liberal status-quo. 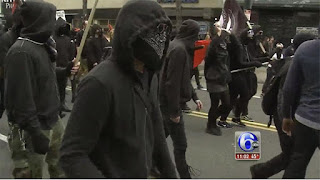 “By 3 p.m., the self-proclaimed anarchists were dominating the crowd. Dressed all in black and wearing cloth bandannas over their faces, they stopped traffic as they marched from the park through downtown with the smaller mix of Trump supporters and counter-protesters. In the park, people opposed to Trump threw eggs and burned the red “Make America Great Again” Trump campaign hats.” - SFGate

Police “Officers” claimed to have confiscated a dagger, metal pipes, bats, pieces of lumber and bricks, yet there is no photographic evidence of this 1970's gang rumble-inspired pirates booty treasure trove of home-made weapons and contraband. The Berkeley PD proved multiple theories about modern police acting as neo-fascist storm-troopers rather than protectors and servants of citizens, as their main purpose at the march was to identify and arrest anti-trump demonstrators on sight, prior to breaking any so-called laws.

“Berkeley Police officers in riot gear first stood by the rally that attracted hundreds at a park less than a mile from the University of California, Berkeley campus. The department said officers worked to identify suspects and arrest them at the first available opportunity.” - AP

By most eyewitness accounts, the majority of the 70 Trump supporters ran away when the scuffles began. Some even employed the fiendishly clever strategy of covering their retreat with pepper spray, as if inanimate projectiles were somehow affected by an airborne respiratory irritant. Which also ironically blew back in their own faces, causing them to choke and gag of their own device. In hindsight, a trashcan lid may have been their most effective defense employment.

A handful of arrests were made, all of whom were anti-trump demonstrators, which comes as no surprise. Police are far more reluctant to detain and harass someone whose racist, fascist, austerity goals align with their own vision of a subservient citizenry and subjugated people of color.

Additional source reference material
April 17, 2017
The Violent Clashes In Berkeley Weren't 'Pro-Trump' Versus 'Anti-Trump'. The media's oversimplification of what happened during Saturday's rally risks obscuring a long-brewing and fast-escalating conflict between the far left and the far right.
(via esquire) 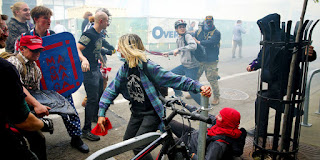 Please read the esquire article and discuss in the comments section.
http://www.esquire.com/news-politics/news/a54564/the-violent-clashes-in-berkeley-went-pro-trump-versus-anti-trump/