The Origins of Slang - Ethnic Groups - People of Color 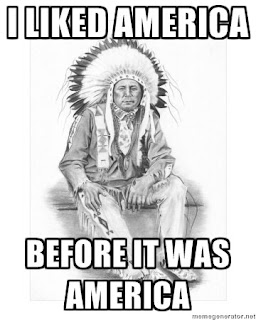 Most of these words are considered derogatory. This article is for educational purposes only. I do not endorse the use of these or similar words. I only know these words because I am a comedy writer and it would be highly unusual if I didn’t know them. For the record, I am an unapologetic man of color, which means I don't make excuses, rationalize or entertain apologist theory for any of the people and circumstances that have lead to the oppression of indigenous and equatorial people. My research involves fact, logic and reason, rather than emotion.
Make no mistake, systemic racism is real. White privilege and systematic teaching of white supremacy are real. You simply have to decide whether you are part of the problem or part of the solution. SP

Nigger
This is actually one of my favorite words to explain, because it’s much deeper than most people realize. This is not only a linguistic anomaly, but also a contextual metaphor. Centuries prior to any connection to the Latin word “Negro”, the root word “Nig” spawned a host of words and phrases with no racist connotation at all. In the early American wilderness of the 18th century “Niggur” was interchangeable with Bloke, Billie, Fellow or Dude and referred to any ethnicity. Billy Shakespeare wrote in the play Macbeth; “be not a niggard of thy speech”, which is now translated as “stingy” but more accurately it means arrested or constrained. It was not until the 19th century that Anglos mistakenly wrote and pronounced Negro as “Nigro” thereby using “Nigra” or “nigger” for short. In colloquial use however, the original meaning still applies. “My Nigga” (with or without the hard “R”) is a term of affection and fraternity. Who more would you trust than someone who constrains their actions or speech on your behalf? For the record, I don’t believe in exclusive colloquial terms. You can’t acknowledge words which some people can use and some people can’t. That’s now how linguistics works. As far as I’m concerned, if we say nigga or nigger, then anyone can say it. Otherwise there’s no point. So if you don’t want to ever hear me say Guinea, Wop, Goombah, Spic, Mick, Kraut, Slant, Slope, Charlie, Dink, Gook, Limey, Kike, Dago, Punjab, Pikey, Cracker, Pecker-wood, Tin-Weasel, Bo-Hunk, Coolie, Chink, Blockhead, Coon-ass, Hymie, Sheeney, Dot-head or Schmatta – then don’t ever let me hear you saying it.
(PS, don’t ever let someones words offend you. If you do, then you’re only empowering some idiot who cannot articulate themselves.)

Spic
Spic is an ethnic slur for someone of Hispanic descent. It apparently originated in Panama as either being short for “speak” as in “no-speak”, meaning someone who did not understand English; or the even more jacked up - but still kind of funny phrase known as “spiggoty”, as in “no spiggoty English”. More recently this origin has been downplayed in the US and UK and some “historians” attest that it was merely an abbreviation of the word Hispanic, but no one with common sense really believes that.

Kike
This is an interesting linguistic anomaly. There are equally viable sources for its origin. Kike has become a derogatory slang term for Jews which was first recorded by German Jews or “Ashkenazim” in reference to Russian Jews, many of whom having names which ended in the suffix “Ki” or “Ky”, with “Kike” becoming a euphemistic nickname. The more popular origin is from US immigration referring to Jews arriving at Ellis Island many of whom were refugees and illiterate in English. As most immigrants who could not read or write signed their name with an “X”, the emigrating Jews supposedly would not sign in this way as they equated an X with the cross of Christianity, so they signed with a circle instead. A circle in the Yiddish language is called a “Kikel” so anyone who signed with it was thereafter referred to as a “kike”.


Wop
The word Wop comes from “WP or WOP” which is actually an acronym created by the United States Immigration Department which stands for “with-out papers” in reference to the Italian immigrants – many of whom had been deported from Italy; who were arriving in New York without passports or documentation at the turn of the 20th century. Although it was a common practice to deport so-called criminals without documentation, many law-abiding Italian citizens (mostly from the southern portion of Italy) were also deported as “ethnically undesirable” by the rest of Italian society.

Dago
This word (pronounced day-go) is derived from the Spanish “Diego” in reference to Mediterranean traders from Spain and Portugal as the English equivalent Jim or James; typically used to refer to the generic male ethnic whose name was unknown and seen as unimportant (i.e. “Nigger-Jim”, “Jim-boy” etc.) The phrase was spread by British sailors and was eventually used most commonly to refer to Southern Italians, North Africans and Mediterranean people.


Gook
Primarily used to describe Southeast Asians, this word has a few semi related origins and interestingly enough it was used in reference to several different ethnic groups all over the world. It was ironically based on some Pacific Islanders use of the word “kook” which means “Nation or Country” in reference to Americans. The First widespread usage was by US marines in the late 19th century during the invasion of the Philippines. The Filipinos and later the Koreans called the Americans “Miguk”, which the marines misinterpreted as “Me Gook”. Throughout the early 20th century US armed forces used the word to refer to Nicaraguans, Haitians, Africans, Indians and finally the Vietnamese.

Guinea
Used similarly to the term “Wop”, guinea was basically short for “Guinea Negro” and referred to Southern Italians and other indigenous Mediterranean people such as Sicilians, Sardinians, and Corsicans. Most Northern Italians who saw themselves as more closely related to European aristocracy basically classified southern Italians as North Africans. Guinea is a country in West Africa and it was also the name which some traders occasionally used to describe the entire region.

Coonass
This is one I’m actually not too sure about. It refers to people of Cajun descent in Louisiana, Texas and Mississippi. Similarly to the term “HillBilly”, in relation to mountain-dwelling Anglos, some Cajuns view the word as derogatory while others see it as a symbol of pride. It supposedly originated with French Soldiers in WWII who referred to Cajun soldiers as “connasse” which essentially means “whore” for their use of broken French language and negative expressions of French culture, but that’s probably a myth. More than likely it originated with Creole Aristocrats and French Canadians for those very same reasons, as they were seen as a negative reflection on them when viewed by Anglo Europeans. Besides, it is very doubtful that French soldiers during WWII would actually degrade anybody who was willing to fight alongside them.

Canuck
When I was a kid I thought a Canuck was a swarthy, surly, stump-jumping lumberjack like “Blaack Jacques Shalaack” from the Bugs Bunny cartoons. As it turns out, it’s not even really that derogatory. It has possible origins in the French word “Canule” or the Cree Indians Algonquin word for a wolf spirit “Kannuk”. It basically referred to French Canadians originally, and then later on it referred to all Canadians. Eventually, “Johnny Canuck” became a fictional Canadian symbol similar to the US “Uncle Sam”.

I didn’t include any derogatory slang for Native Americans because I couldn’t find any that were interesting, although I admit I was very ashamed of myself for thinking a few of them were pretty funny, such as “wahoo”, “prairie-nigger” and “chug” (I guess because we drink a lot). It just goes to show you that stereotypes are partially based on fact. For example, I almost never get lost and I drink all the time.

By the way, the name “Skip” is actually UK slang for an Australian Hillbilly. I had no idea.

Goodnight everyone. Now beat it before I sick my dog on you.