published July 10, 2017
A Breakdown and Comparison of Low Carbohydrate Vs. Low Fat Diets
by Skip Pulley 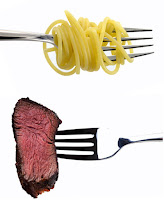 When I am training or trying to keep fit, I sometimes experiment with diets and exercises. When the low-carb craze started, I began to eat a lot of pork rinds, beef jerky and seafood wrapped in bib lettuce. After a week, my sodium level shot through the roof until my body was like a giant salt-lick. I had to look over my shoulder for deer while jogging in the woods. I felt like a slim Jim floating in the dead sea. On the other hand, when I drastically reduced my fat intake, I instantly realized that fat is what makes food taste good. If I closed my eyes it was hard to tell if I was eating a plate of food or the plate itself. I understand that these things should be done in moderation, but who has time for that? Besides, my bad carbs came from refreshing adult beverages and my bad fats came from things I should limit regardless. So I hit the gym, cut out the nitrates and "bada boom"; case dismissed.

So you can make an informed decision, here is my breakdown of the comparison.
Low carb diets usually provide faster weight loss than low fat diets, however the overall results and long term health effects are questionable. To help understand the debate, let's examine the way each one works. Low fat diets limit your intake of fat decreasing the amount that will end up being stored in the body. By keeping outside fat sources low, the body will more likely use its' own fat stores when that type of fuel is needed, thus reducing body weight. Low carbohydrate diets limit the intake of carbohydrates. "Carbs" are the body's preferred source of fuel. When carbs are limited, the body utilizes more fat instead. This in turn leads to weight loss.
With all the resources available for individual research, it seemed as if the debate on low-carbohydrate vs. low-fat diets for weight loss would never end. Fortunately, there is now more extensive data on the results of the diets.

A recent review of multiple studies examined the findings of controlled clinical trials involving people on low-carbohydrate diets and low-fat diets. At six-months, those on the low-carbohydrate diet lost more weight. However, by the end of the year, followers of both diets had lost comparable amounts. The results from this meta-analysis also showed that people on the low-carbohydrate diet had statistically significant increases in both total and harmful LDL cholesterol. On the plus side, their protective HDL cholesterol also rose significantly. A major concern in following a low-carb diet for an extended period of time is that high protein, high fat diet can potentially cause a rise in cholesterol levels, but neither of these may have any long-term effect, since most people discontinue low-carbohydrate diets after a relatively short time.

So if either type of diet leads to comparable amounts of weight loss, what are the long term health effects? Many, including the late Dr. Robert Atkins, have promoted the idea of restricting carbohydrates instead of fat to lose weight, although not everyone is convinced it's a good idea. A new study in the New England Journal of Medicine provides evidence that in the short term, a low-carb diet helped people lose weight without any adverse effects, and improved some indicators of health. One study followed severely obese people with a high rate of diabetes and high risk for heart disease for six months. They found those people lost more weight on a low-carb diet compared to the low-fat diet. The low-carb group also had improvements in insulin sensitivity and lower triglyceride levels, an important risk factor for heart disease.

In this study, bad cholesterol and blood pressure were not significantly raised. However, by the end of the year a lot of weight had been regained, so that the difference in weight loss between the two diets was not significant. Although the study shows that a low-carb diet does result in short-term weight loss and has some short-term health benefits, the verdict on the diet's long-term benefits is debatable. The number of participants in that study was relatively small, and the researchers did not follow up to see what the longer-term weight loss and health effects were. The problem is that people tend to put the weight back on over time. In any case, exercise is also needed for a healthy lifestyle. Eating fewer calories while increasing physical activity are the keys to controlling body weight. Eating less and exercising more is the most effective way to lose weight and/or body fat in the long term.

Not surprisingly, some physicians have completely endorsed low-carb dieting. This is mostly because the companies that produce low-carb diet products such as foods and beverages, and media - such as books and videos - financially reward those physicians who find positive results from low-carb dieting in their studies. So, is losing weight faster an advantage? According to most studies and my own research and experience, slow weight loss is more effective in the long term, but fast weight loss is easier and more appealing. If weight loss were a sprint, the low carb diet plan would win hands down. It is not completely certain why people lose weight faster on low carb diets. One of the most likely explanations is that they are better at suppressing appetite making it easier to cut calories.

Is losing weight on a low-carb diet really safe from the standpoint of heart attack, cholesterol, stroke, and diabetes? We don't really know for sure. In the short term there are some favorable metabolic effects such as lower triglycerides and less insulin resistance. However, it is still unclear if this is a product of the actual diet or the resulting weight loss. In general, cutting back on food is what works best. There are many different paths to weight loss. You need to find a plan that works for you. One that you can stick with that includes healthy foods. Cutting back on sugar, refined and white flour are very important.

So which diet is more effective for long-term weight loss, low fat or low carb? In my opinion, the jury is still out. I recommend moderating your eating habits. Choose healthy, nutrient rich foods while limiting consumption of fats and oils, combined with moderate physical activity. No single diet is appropriate for everyone. Just remember to eat whole, natural foods, drink plenty of water and get regular moderate exercise so you can burn more calories than you consume.