Subliminal Fascism: the 2-party system is slavery with extra steps

published October 01, 2017
If it makes you feel any better, you never actually had a "choice"
The Great Illusion of the two-party system is that it allows the voter a choice – usually between a liberal and a conservative government. The reality is that, whichever party wins the election, the government is, in truth, a totalitarian one. The “choice” is a mere distraction from the true objective. - Doug Casey
"American voters only have the illusion of choice". Randi Nord, an American geopolitical analyst and content strategist, says elections in the U.S. are “all theatrics” and voters don't have a real choice.
“Our elections themselves are all theatrics. Lobbying groups with massive spending power propel politicians into office to make decisions and write laws on their behalf,” Nord tells the Tehran Times.
“Corporations and wealthy groups have the power to control who makes it into office,” noted Nord, who is owner and editor of Geopolitics Alert. She adds, “People in the United States are fed up with the bogus electoral process. Most people who actually vote admittedly don't like the candidates and know it's a sham. Some feel like it's still their duty to vote as countrymen. Others are duped into believing they're preventing a more evil candidate from assuming office.”
Additional reference material
click the image to order 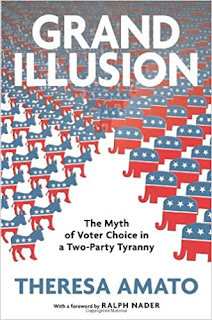