The imminent collapse of the US economy (from the editorial archives)

published January 15, 2022
The imminent collapse of the US economy and social systems
(Originally Published at Anarchism University in October, 2011)
by Skip Pulley
Sociology and Systems

Sometime in the not too distant future our society, which is made up of systems that regulate, sustain and control most human beings on earth, will experience a substantial - if not complete collapse. Let me say first, that I am not an system economist, I am a social deconstructionist and a true anarchist (autonomous egalitarian community) which means I stand to gain absolutely nothing if I’m right or wrong – and as a minimalist, I also have nothing to lose.
Try to think of modern society as a child’s drawing. Trying to point out and fix things that are wrong with it is completely useless, especially when the faults are subjective. You can study, analyze, discuss and understand it all you want, at the end of the day it is still an idealistic version of how things are (or should be) from a child’s point of view. The one thing that all children have in common is the inherent ability to expect good things rather than bad will happen – and to see the good in everyone and everything. We lose that as we get older. We shouldn’t but we do. There is a reason for that. To help you understand how things got so bad and why there is little that anyone can do about it; I will break it down in two parts; sociology and systems.

Everything in the universe has two sides. You may favor one over the other, but you cannot completely accept one side of something while completely rejecting the other. Over the past 50 years through massive corporate funding the mainstream media has broadcast and reported on only one side of global events – no matter how much it appears to be objective and impartial. The main purpose for this was to control the future direction of the events being reported to keep the public from asking “unnecessary” questions about what was really happening. When the USSR dissolved, we were told that all Russians were jubilant and went out into the streets of every town to collectively rejoice in their newly found “freedom”. No sooner than that story broke over the air we were then immediately told that this was the worst possible thing that could happen to them because now they were facing certain economic collapse; they would probably starve to death and murder each other. In addition to that, the former republics were all now renegades with nuclear weapons and they could easily attack the US and NATO without provocation. So which version was true? The answer is neither one. The Soviet was created and controlled by an extension of the same crypto-fascist element that expanded Euro Imperialism westward to the US. They were merely flip-sides of the same coin. Some people refer to this group as a “secret society”, however there is absolutely nothing secret about them. To put this in perspective, contrast the Soviet Union in the 1980’s with the US right now. The Soviet Union in the 1980’s had a massive, well-equipped and extremely expensive military that were bogged down fighting so-called Muslim “extremists” in the Middle East. They also experienced soaring energy costs and shortages linked to peaking oil production and untenable trade balances resulting in runaway foreign debt. Does this sound familiar? Add to that a delusional self-image in global affairs, an inflexible ideology and unresponsive, corrupt judicial and political systems; hell-bent on declaring fictitious “wars” on drugs and terror instead of attempting to offer a viable solution. The difference is, unlike the US and other western cultures, Russian culture was completely adaptable to a post-soviet era and its public was prepared for the socioeconomic climate change.
The current US crisis is proof that a debt based economy can continue through sheer inertia well after they become completely untenable. Eventually however, the tide of fraudulent economic practices such as the fractional Federal Reserve banking system and unsuccessful bail-out attempts by politicians and legislators propped-up by the corporatocracy (and the fractional reserve banking system) will cause the ever increasing credit bubble to burst. The entire US economy and society currently rests on the false assumption that it is possible to continually rely on the “Fed” to create money (credit and debt) out of thin air while also perpetually borrowing increasing sums of money from its own citizens and the rest of the world.
This is necessary to pay for ever-increasing manufacturing and energy imports, while the price of those imports steadily escalates. In particular the US economy and floats along on the notion that fiat petrodollars and US Treasury notes will always be able to buy energy imports (in the form of petroleum) from foreign countries, specifically the Middle East. If that were true, we would not be sending armies of young men (and women) to the Middle East to fight and die for control of that very oil supply. Oh, that’s right. I forgot. It was for the delusional pretext of “freedom”, that has sent the cream of prior generations youth to their absolute doom for no other reason than money and power; as the global boogieman morphs from Caucasian (Russo/German) to Asian, to Arab, to who knows what next.
Fighting expensive pointless wars is the bad news. The good news is that it will not continue much longer. The US's free petrodollar currency scam is a transient condition. After the US dollar loses its world reserve currency status based on its role as the petrodollar (as is now happening) the flow of petroleum to the US will only be possible through military conquest. Unfortunately Iran and Venezuela both have good leadership and strong armies, so the US (under the guise of NATO) has set its sights on North Africa, the mistake of all mistakes. Eventually the European, Asian and African Unions will unite and begin a massive sell-off of the US dollar, devaluing the currency. Because most of the global economy depends on US consumption, all foreign markets will eventually feel the effects in the form of a shock-wave. The difference is those markets are better equipped to survive it. Recently, the US stock market fell by 100 points in 15 minutes because there was an implication that South Korea “might” be shifting out of US dollars because a Korean central banker mentioned the word “diversification”. It’s true that China and Japan depend on their exports to the US, but India and Russia do not – and they also hold more US currency than they would like to. The first foreign market that decides to “dump” the dollar will precipitate a domino effect and create a world-wide financial panic. The only reason it hasn’t happened already is because there is currently no (apparent) viable substitute for the US dollar. The US global hegemony is being effectively challenged. Just what do you think will happen when we invade the next country with our currency at 50% of its value?

Part Two: Systems
All beings in the universe are either controlled by, related to or contain some type of system. Inside our bodies we have circulatory, digestive and skeletal systems, etc. We rely daily on systems of mathematics and chemistry. If and when a system breaks down – in any way, for any reason, we break down - under all circumstances.

When petroleum imports become dramatically reduced and the dollar is worth half its current value, much of the US economy will simply be forced to shut down. 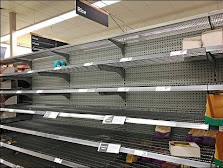