The imminent collapse of the US economy and social systems
(Originally Published at Anarchism University on October, 2011)
by Skip Pulley

Sometime in the not too distant future our society, which is made up of systems that regulate, sustain and control most human beings on earth, will experience a substantial - if not complete collapse.
Read More
Open Letter to Congress and Identity "voters" on Roe v. Wade
posted on social media April 2022
Dear Mayors of Simpleton,
The "democrats" have had 50 years to codify Roe v. Wade into law, including a super majority under Obama. But they didn't. Because that wasn't their goal. Their goal was to keep the threat of overturning Roe to scare you into voting for them. Same with the "republicans", who have poked evangelicals with a stick for 50 years promising to deliver on pro-life promises. They are like the dog who finally caught the car and now doesn't know what to do. These issues (guns, abortion, drugs) have been with the courts instead of lawmakers to con you all into fighting each other. It's a scam. You're being played. They don't care who lives or dies, they just want your votes. Identity-politic nitwits don't really want to change anything, they just want to argue with each other about possible change. It's pathetic. Fortunately, you won't have an eternity to contemplate your gullibility. By 2027, almost half of Gen Z will be transgender, most of the fresh water table will be dry and the dollar will be worth about 32 cents. But hey, who needs fresh water or continuation of humankind as a species - when you have elderly orange puppets, animal agriculture and children's drag shows. Good luck, humps. ~ Skip Pulley
Social Commentary on Roses Discount Stores
posted on social media March 2022

You can literally buy an actual pig's foot, off the shelf at a Roses store. It was in between the del monte ketchup and spaghetti-ohs. They done pickled that jawn. And the foot bone is still in there. Some of you are like, "Skip, why were you at Roses?" Uh, duhdoyoeee. Andy Cap's Hot Fries, Black excellence T-shirts (with the black jesus prayer hands), cheap potting soil, the list goes on and on. And I just remembered, I forgot my olive oil hair grease, so I have to go back this weekend.
[Roses is a discount department store chain in the Southeastern US. The are owned by Variety Wholesalers, who also owns Maxway, Super 10, Bargain Town, Bill's Dollar Store and Super Dollar.]
(the following weekend...) Yeah, that's me alright, BLACK EXCELLENCE. All day long, several times on the weekend. (imaginary gunshot sounds) Hear me now! Watch this! wah gwan!!!

I know you're thinking, "Skip, where you got that fly Tee from?"
Take it easy, cheesy. At my good friend Rose's. That's where at.
They were all out of pickled pig knuckles, but they had plenty of those Palmer's salted nut logs. If you are a big nougat fan,
I recommend you mosey on over yonder and grab one with your hands. Also, Kahuna mean's "King" in the ʻŌlelo Hawaiʻi language. Be sure to subscribe to
the Kahuna Life youtube channel. And all your wildest dreams will come true.
Valentines Day? Schmalentines Day!
The true meanings and origins of Valentine's Day
(posted on social media February 15 2022)
The Romans had a 3-day festival called Lupercalia, which consisted of drunken fist-fights, under-cooked meat, and lots of sexual debauchery, mostly in public. This festival was seen as necessary for two reasons;
1 – Because the roman soldiers (most of whom were unmarried) in their winter isolation before the spring military campaigns, would constantly bugger each other in the hiney or hang out in brothels all day to the point of not getting any real work done. (many of the prostitutes in brothels didn't like humping rank-and-file troops; my guess would be because they had lots of venereal critters from being out on the road pillaging and whatnot all the time)
2 – It was an opportunity to blow off steam and celebrate because many soldiers would not be coming back from war alive and in one piece, In addition to having been all pent up and broke all winter long. So basically, the festival began with all the single men stripping naked, then killing dogs and goats to make whips out of their hides and flesh. Then they would goat whip all the single women who were also stripped naked and had gathered in the town square. The men whipped them literally until their “arms were tired”. If the bloody, whipped women were still conscious or alive after the whipping, they would write their name on a CARD and put it in a lottery box. When a man drew a woman's card, he then had access to her sexually for the whole 3-day festival. If somehow the two of them fell in love during this debacle, they were allowed to get married. If not, they they would do it all over again next year. 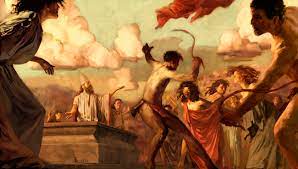 Fast forward a couple of centuries. Several priests, all named Valentine (which I can only assume was a common name for a priest) had been martyred in mid-February, mostly for performing unsanctioned marriages (instead of just allowing sexual congress without marriage). One of these priests, before his execution, wrote a beautiful love note to his girlfriend, whom he had just met, who also up to that point in time had been blind, but apparently he hit her up with high powered Jesus lightning and her sight was restored. He signed the note “From your Valentine”. Although, I'm not sure who taught her to read so fast, as she didn't even know what words were before then. Maybe someone read it to her. Anyway, the Pope found out about the note and was all like “yeah, that's tight. I like the sound of that. We could sell stuff and have balloons”. So he met with the emperor Claudius, who was a complete asshole. (he didn't want lower class soldiers to get married, because he thought it would make them homesick) They decided to keep the cards and the love notes and the fortified wine and rare meat, and get rid of the whippings and dog murder and public intercourse. So, here we are today. Valentine's – A soulless, corporate, money-making cash-grab between Christmas and Easter.
The morals of this story are: A. Romans are Dicks, B. It's okay to be alone, especially when the alternative is being with a jerk, C. throwing a big, lawless redneck festival may slightly reduce military rapeyness and uninvited homosexuality, and D. If you're blind, and every optometrist tells you there's nothing they can do, consider seducing an imprisoned priest on death row... If you're over 18, obviously.
Thank you!! Goodnight

Remember, if you see an otter walking around outside, don't try to pet it. Even if it has a sweater on.
2020 is Hindsight: A Collection of Pandemic Observations and Absurdities
posted at Kahuna Life on January 3rd, 2021 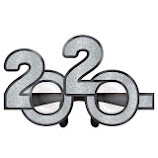 ...there is a known scientific fact that it literally takes YEARS to develop a safe, effective vaccine; of any type - for any purpose. According to every so-called expert and all existing literature on the subject. The Development - to Clinical Trials - to Testing, can sometimes take up to 10 years, but the average nowadays is 4 to 7 years. Yet, we are now being told that a completely safe, effective vaccine has completed development in a matter of months with zero accompanying clinical data and no known published testing or trial results. The world health "authorities" are strongly encouraging everyone to put something into their bodies that hasn't even been tested on animals. And people are lining up to do just that. In droves. Read More.